Here is a choir singing an arrangement of it:

(The arrangement they sing has a different ending.) 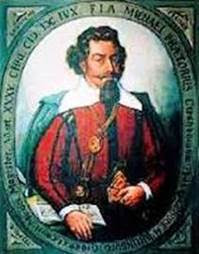 Michael Praetorius was the youngest son of a Lutheran pastor. His birth name was Michael Schultze.  He attended the University of Frankfurt where he studied divinity and philosophy.  In 1587, he began serving as organist at the Marienkirche, Frankfort.

Then he obtained a position in the court of Henry Julius, Duke of Brunswick-Lüneburg at Wolfenbüttel.  Praetorius was the organist in the duke’s State Orchestra and (from 1604) master of the choir.

He died on his 50th birthday in Wolfenbüttel, Germany.   His tomb is a vault beneath the organ of the Marienkirche there.

http://youtu.be/ODDfaAybNKk piano instrumental with lyrics, so you can sing along (relaxing scenic photos accompany the music)

http://youtu.be/UkXIjZERSnE Baptists singing it, with lyrics on screen, with direction, piano, and organ  (In the Southern Baptist Church I attended in Smithville, Missouri, the Director of Music would usually direct the congregation in the singing of each hymn, as happens here in Raleigh, North Carolina.)

The tune was composed by Clara H. Fiske Scott, who died at age 55 on June 21, 1897, in Dubuque, Iowa, when she was thrown from a buggy by a runaway horse.  She is also the author of the words of the hymn.  Her book of anthems, the Royal Anthem Book, was the first book of anthems by a woman ever published.  It was published in 1882.

Clara Fiske was born on December 3, 1841, in Elk Grove, Illinois. She studied music at the Music Institute in Chicago, then she taught music at the Ladies Seminary in Lyons, Iowa.

In 1861 she married Henry Clay Scott.

We are still in Eastertide, so the Old Testament reading is replaced with a reading from Acts.  This week it is Acts 17:22-31.  It is the story of Paul preaching in Athens to the council of the Areopagus. (The “Areopagus” was the Rock of Ares, where, according to myth, the Greek god Ares had been tried by other gods for the murder of Poseidon’s son.  Before the 5th century BC, a council of elders of the city of Athens met there.  Later, it was where a council met that investigated corruption.) 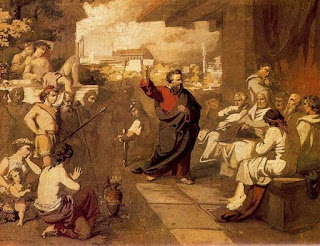 The gospel reading is John 14:15-21.  Jesus promises the disciples that he will ask the Father to send them the Holy Spirit, who will help them:

If ye love me, keep my commandments.

And I will pray the Father, and he shall give you another Comforter,

that he may abide with you forever;

Thomas Tallis composed a wonderful piece for these verses, but  one has to sing the word “spirit” on one note, and the “-er” of the word “another” on three notes.  We tried to sing it in 2008, but it was too difficult.  The young man in the video at the link below can sing it fine.  In fact ,he can sing all four parts:

https://youtu.be/lLf4Y0wJ3ZI “If Ye Love Me” by Thomas Tallis, all parts sung by Josh Turner (multi-track)

The following link is to a performance of the piece that is very good (and the singers aren’t even native speakers of English):

https://youtu.be/_7lZHByBB84 Harmony Quartet sings “If You Love Me”

There is a hymn on the subject with quite pleasant music by William J. Kirkpatrick:

The harmonies are better in another hymn, which is less well-known, “Since the Comforter Has Come,” by James M. Kirk.  You can hear it by clicking the “play audio recording [.mp3]” play button icon at:

http://library.timelesstruths.org/music/Since_the_Comforter_Has_Come/ “Since the Comforter Has Come,” words and music by James McPherson Kirk

The second hymn in no. 376, “Love Divine, All Loves Excelling.”  The words are by Charles Wesley, “the bard of Methodism.”    It is one of the many hymns authored by Charles Wesley (1707-1788).  He wrote this one in 1747.  That was the year that the Presbytery of Suffolk County was formed.  (The town churches of Suffolk County had been thrown into turmoil by the Great Awakening of 1740 and had begun to recover in 1746. Much of the turmoil had been fomented by an acquaintance of the Wesleys, the Rev. George Whitefield, who had gone about the colonies preaching to huge crowds, often in the open air.)  Of the hymns in the 1990 blue Presbyterian Hymnal, those by Charles Wesley make up the second largest number.  (The largest number of hymns are by Fred R. Anderson who “versified” Psalms for the psalter part of the hymnal.) 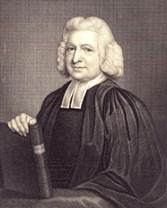 Charles Wesley was the son of Samuel Wesley and the brother of John Wesley.  Both John and Charles went to Georgia in 1735 as missionaries of the Society of the Propagation of the Gospel in Foreign Lands (Georgia being a foreign land in the eyes of the Church of England).  He returned to England in 1736.

Charles Wesley was born at Epworth, 18 Dec 1707, and died in London, 29 Mar 1788.  He attended Christ Church, Oxford, obtained his degree in 1729, and was then a college tutor until he took orders and went to America with his brother John, who was secretary to General Oglethorpe.  He didn’t stay in America long, and after going back to England, he never returned.

The tune HFRYDOL is by Rowland Huw Prichard.

The tune appeared in Prichard’s song book, “The Singer’s Friend” which he wrote for use by children.  “Hyfrydol” means “cheerful,” and was composed by Prichard when he was 20.

Many different hymns are sung to the tune.  In the Baptist Hymnal alone, in addition to this hymn and “Come, Thou Long-Expected Jesus,” there are: “Praise the Lord! Ye Heavens, Adore Him,” “Jesus! What a Friend of Sinners,” and “I will Sing the Wondrous Story.”

You can watch Doris Akers herself singing her hymn at the link below.

I doubt if we will be singing it quite the same way.

We will be singing a “presbyterianized” version. 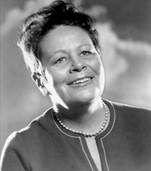 Doris Akers was born in Brookfield, Missouri, on 21 May 1923,  and lived in Brookfield until age 5.  The family then moved to Kirksville, Missouri, which is 50 miles northeast of Brookfield.

She was one of ten children.  Her parents were Floyd and Pearl Akers.  The family was very musical.  Doris wrote her first song at age 10, “Keep the Fire Burning in Me.”

In 1945, she moved to Los Angeles and, at age 22, was the pianist and vocalist for “The Sallie Martin Singers” for two years.  Then she formed her own group in 1947.  In 1948, she was a member of the Simmons-Akers Trio, with Dorothy Simmons and Hattie Hawkins.

In addition to writing hymns, composing music, and playing the piano, Doris Akers was an excellent choir director.  In Los Angeles she directed an integrated choir called the “Sky Pilot Choir.”

You can see a long list of the hymns and music she created at http://us.search.ccli.com/search/author?Authors=4294895379&Sorting=Popularity .

In her later years, Doris Akers was minister of music at Grace Temple Deliverance Center in Minneapolis, Minnesota.  She died in Minneapolis on 26 July 1995, age 72.

In 1976, Kirksville celebrated the bicentennial with a concert by Doris Akers.  The celebration was called “Doris Akers Day.”

The prelude is “Prelude on ‘Evan’” by “Gerald Peterson.”  The name “Gerald Peterson” is just a pseudonym.  The composer is actually Lani Smith.  Lani Smith had more than 4,000 of his compositions published.  He used many pen names, including Gerald Peterson, Edward Broughton, David Paxton, Franklin Ritter, Tom Birchwood, and Christopher Gale. Lani Smith was born in Cincinnati, Ohio, on 09 Jun 1934.  He died on 24 Jun 2015 in Tucson, Arizona, where he lived with his wife of thirty-five years.  Even in semi-retirement, he wrote several arrangements for organ every week.

Lani Smith earned Bachelor and Master degrees in composition from the College-Conservatory of Music of the University of Cincinnati. From 1967 to 1982 Mr. Smith was a member of the editorial staff of the Lorenz Publishing Company, serving as editor of several choral and organ magazines. Throughout his career, Mr. Smith also served churches in Ohio, Michigan, and California as an organist and choir director.

Mr. Smith composed and arranged thousands of organ, choral, and piano pieces, as well as over 30 cantatas, special worship services, and youth cantatas. While known primarily for his sacred music, he was equally at home in any musical genre, including rock, pop, jazz, and classical contemporary. He made many musical contributions in the secular field, including works for orchestra, chamber ensembles, solo voice, ballet, and musical theater.

Commissions from various musical organizations, including the Cincinnati Symphony Orchestra, were received by Lani and many awards came his way, including an annual ASCAP award in recognition of his compositions efforts and the Bearns Prize in Composition awarded through Columbia University. He was also the recipient of a Rockefeller Foundation grant.

I didn’t find the prelude arrangement for organ, but here is the hymn tune EVAN (1846) is by William Henry Havergal.

The tune is used most with “The Lord’s My Shepherd, I’ll Not Want.”  It is also used with “O for a Faith that Will Not Shrink,” “I Heard the Voice of Jesus Say” and this one:

http://youtu.be/0gtYBTxT4XI  “Oh, that the Lord Would Guide My Ways,” hymn tune EVAN

I liked the title of “O for a Faith that Will Not Shrink” so I looked that one up too:

https://youtu.be/NhQBP6K4I8s “O for a Faith that Will Not Shrink” (words by William Hiley Bathurst) sung to the tune EVAN.

O for a faith that will not shrink, tho’ pressed by ev’ry foe;

That will not tremble on the brink of any earthly woe;

That bears unmoved the world’s dread frown, nor heeds its scornful smile;

That seas of trouble cannot drown, nor Satan’s arts beguile.

The music during the offertory is “Prayer Response” by Mark Davis, a contemporary composer/arranger.

The postlude is “Chant” by Robert J. Powell.  This was also the prelude on February22.

Robert J. Powell was born in Benoit, Mississippi in 1932.  For 34 years, he was the organist/choir director at Christ Episcopal Church in Greenville, South Carolina.

Since retirement, he has been the organist at Trinity United Methodist Church.  He also served as organist at the Cathedral of St. John the Divine in New York City. 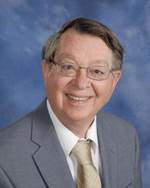 Posted by OSHPC Reporter at 8:22 PM