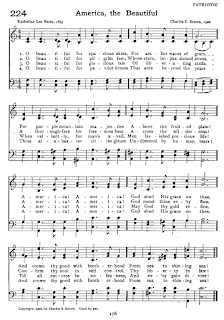 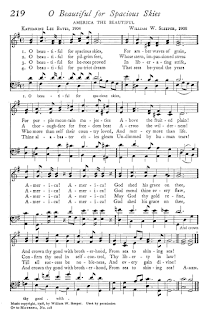 The introit will be “Father, Fill Us with Thy Love.”   The tune is HORSHAM. http://www.hymnary.org/media/fetch/183457

“America, the Beautiful,” hymn no. 564, is the opening hymn.  The text is by Katharine Lee Bates, the daughter of a Congregational Church pastor.

Katharine Bates was born in Falmouth, Massachusetts, on 12 Aug 1895.  She spent a year at Oxford University in England, then attended Wellesley College.  After graduating from Wellesley, she taught literature there.  She was also involved in social and labor reform. 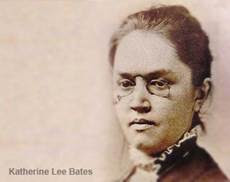 She never married, but did develop a romantic relationship, and for 25 years she lived with Katharine Coman, a dean at Wellesley.

Bates described their relationship as a “romantic friendship.” The couple lived together for 25 years until Coman died. “So much of me died with Katharine Coman,” Bates said, “that I’m sometimes not quite sure whether I’m alive or not.” To honor her partner and celebrate their shared love and scholarship, Bates wrote “Yellow Clover: A Book of Remembrance” (1922).

You can read her poems in that book here: https://archive.org/stream/yellowcloverbook00bate#page/n7/mode/2up

Bates became chair of the English department at Wellesley and Coman of the Economics department.

When Bates arrived at Wellesley College to teach English, she viewed the job as merely a way to earn enough money so that she could write poetry during the rest of the year. But Coman’s intelligence and determination gave Bates reason to view her career “as a woman professor and scholar, pulling her up several levels, modeling serious vocational and professional commitment to her teaching, and introducing her to the wider world of social, economic, cultural, gender, and spiritual issues [Mahoney, 1998].”

The words of “America the Beautiful” are now almost always sung to the tune MATERNA by Samuel A. Ward.  He composed the tune in 1882.  This tune is also used for the words of the hymn “O Mother Dear, Jerusalem.”

https://youtu.be/7mTYfpXSQZg “America the Beautiful,” a cappella, multi-track version with one singer singing all the parts

https://youtu.be/6ya9CettFNQ “America the Beautiful,” sung by the University of Utah Choirs (terrific ending)

The words were first set to music by Silas G. Pratt.

The composer of the tune MATERNA, Samuel Augustus Ward, was born 28 Dec 1848 in Newark, New Jersey.  As a child, he played the accordion.  At age 16, he became the organist of a church in New York City.  Later, he was the organist at Grace Episcopal Church in Newark where he also owned a music store.

He wrote his tune while on a boat back to Newark after he had spent the day at the beach and amusement park on Coney Island in Brooklyn.  He wrote the music to be used with the words of the hymn “O Mother Dear, Jerusalem,” a 16th century hymn for which a Presbyterian minister in Scotland sometimes is given credit. (David Dickson, Professor of Divinity at Glasgow, is said to have authored it, but he may instead have translated and adapted the words of a Latin hymn.)  “O Mother Dear, Jerusalem,” was a moderately popular hymn and has appeared in 268 hymnals.

You can see the words of that hymn here: https://youtu.be/FCix4LE-XeY “O Mother Dear, Jerusalem.”

The hymn “O Mother Dear, Jerusalem” does appear in the green Presbyterian Hymnal (1933) that Old South Haven was using when I first began attending (hymn no. 436), and in that hymnal it is sung to the tune that Samuel Ward composed for it.

Samuel Ward died on 28 September 1903, before the tune was used as a setting for “America the Beautiful,” which did not take place (one source says) until November 1904. (Wikipedia and other sources say, however, that Samuel Ward’s tune and Katharine Bates’ words did not appear together until 1910.)

Before that, the words were sung to a number of tunes written for “America the Beautiful,” including a tune by Charles S. Brown (1906), attached, and one composed in 1908, which fits the words even better, by William Sleeper, also attached.  Horatio Parker also composed a tune for the words, and the words have also been published set to the tunes REX REGUM by John Stainer and to WELLESLEY by Clarence G. Hamilton.

After 1910, hymnals tended to use Sleeper’s, Ward’s, or Brown’s tunes, with Samuel Ward’s finally winning out over the others around 1917.

The reading from Acts, which is in place of a reading from the Old Testament during Eastertide, is Acts 1:6-14.  The reading includes the story of Jesus ascending into heaven:

After he had said this, while they were watching, he was lifted up and a cloud hid him from their sight.  As they were still staring into the sky while he was going, suddenly two men in white clothing stood near them  and said, “Men of Galilee, why do you stand here looking up into the sky? This same Jesus who has been taken up from you into heaven will come back in the same way you saw him go into heaven.”

You can see Jesus disappearing into the clouds in this painting by the German Renaissance painter Martin Schongauer.  It is a detail of the altar piece in the Dominican Church in Colmar. It is now the Unterlinden Museum, Colmar, Alsace, France.  (Colmar was in the Holy Roman Empire, but is now in France.)

According to Schongauer’s painting, the clouds were rather low that day. 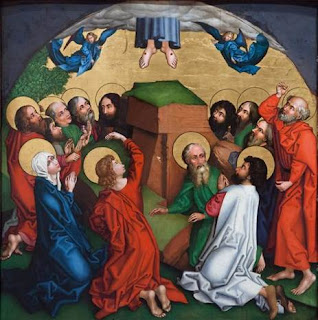 Ascension of Jesus by Martin Schongauer, circa 1480

The gospel reading is John 17:1-11.  The reading refers to a time after the triumphal entry, but before Jesus’ arrest.  First Jesus prays that God will “glorify” him, then he prays for the disciples.

The second hymn is no. 434, “Today, We Are Called to Be Disciples.” The hymn was written by H. Kenn Carmichael in 1985.  It is sung to the tune KINGSFOLD, an English country song harmonized by Ralph Vaughn Williams.  We sang this hymn in January 2014.

The tune is also used for “O Sing a Song of Bethlehem” and “I Heard the Voice of Jesus Say.”  There is even one hymnal that has set “We Sing the Mighty Power of God” to the tune.

Although said to be an English country song, it is nearly identical to the Irish song, “Star of the County Down.”  (See: http://youtu.be/Rc82kInq2rQ, http://youtu.be/HEt2XdN_TbQ .)

There is also an instrumental performance of this tune on mandolin and guitar,  http://youtu.be/d-J1o9BTQEk .

Another hymn sung to the same tune:

https://youtu.be/6rr_4M5LQLo “I Heard the Voice of Jesus Say,” sung to KINGSFOLD 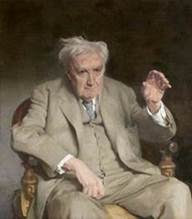 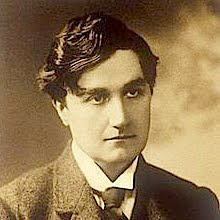 In addition to writing hymns, H. Kenn Carmichael wrote the script for the movie Saint of Devil’s Island in 1961 and the script of The Mark of the Hawk in 1957.  For the latter, he also served as the location unit manager while it was being filmed in Nigeria. 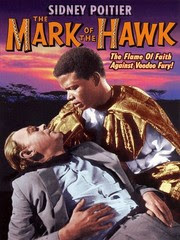 Although he died in Los Angeles, he is buried in the Verona Cemetery in Dane County, Wisconsin.

The sermon title is  "Questions After the Excitement."

The closing hymn is “Like the Murmur of the Dove’s Song,” no. 314.  This is a new hymn for the Old South Haven congregation, I think.

He has served as Assistant Rector of the Christ and Grace Church, Petersburg, Virginia, (3 years), Vicar-Chaplain of St. Mark’s Chapel at the University of Connecticut, Storrs, (9 years), and resident Companion of the Community of Celebration in Aliquippa, Pennsylvania, (3 years).

Dr. Daw was a consultant member of the Text Committee for The Hymnal 1982 of the Episcopal Church, and that is when he contributed this hymn to the new hymnal.

From 1996 to 2009, he was Executive Director of The Hymn Society in the United States and Canada.

He is currently Adjunct Professor of Hymnology and Curator of the Hymnological Collections at the Boston University School of Theology.

The tune, BRIDEGROOM, is also relatively modern.  It was composed by Peter Warwick Cutts in 1969. Is his most well-known tune.  We also sing a hymn to another of his tunes, WYLDE GREEN.  (The hymn is  “Thanks to God Whose Word Was Written.”)

Peter Warwick Cutts was born in 1937 in Birmingham, England.  He obtained a B.A. (1961) and M.A. (1965) from Clare College at Cambridge University.  He also received a B.A. from Mansfield College, Oxford, where he studied theology.  He then served as organist at a number of United Reform churches/

In 1989, he moved to Massachusetts where he served as Director of Music at a number of churches (including the First United Methodist Church of Watertown, Massachusetts) and also taught at Andover Newton Theological School, Newton Centre, Massachusetts.

Upon his retirement in 2005, he retired to the UK.  He has composed over 130 hymn tunes, the best known of which is BRIDEGROOM.

Here it is sung in Chinese by the choir of Cheung Lo Church, the Church of Christ in China, Kadoorie Hill, Hong Kong:

https://youtu.be/aK7uvwk0JwI “Like the Murmur of the Dove’s Song,” words by Carl P. Daw, Jr., tune BRIDEGROOM by Peter Warwick Cutts

The prelude is “Andante Religioso” by Henry Smith.  I found the sheet music on the internet, but I didn’t find an audio file.

But as I had the sheet music (copyright 1916), I just fed it into SmartScore and produced a MIDI file, attached.

It sounds good as a piano piece too.  I may have missed some accidentals.  There were quite a few.

The offertory is “Chanson Mantinale (Morning Hymn)” by Richard Lange.  There is a “Richard Lange” who was a German arranger and composer who lived from 1867 until about 1915, but I don’t know whether that Richard Lange is the arranger of this piece.

This arrangement of “Chanson Mantinale,” was edited by Dr. William Carl and bears a copyright date of 1916.

Here is the piece:

The postlude is “Gothic March” by Gaetano Ferdinando Foschini.  Foschini was born in Polesella, Italy, on 25 Aug 1836, and died in Turin on 12 Mar 1908.  In addition to being a composer and musician, he was also a conductor.

At age 14, in 1850, he was appointed organist of the Cologna Veneta Cathedral in the Province of Verona.

When he was 19, he moved to Milan.  He became Director of Music at the Asti School of Music and was also conductor of the opera at the Alfieri Theater from 1875-1889.

He conducted the band of the town of Turin from 1889 to 1900 and also taught harmony.

Posted by OSHPC Reporter at 8:01 AM