From: Richard Thomas [mailto:richardathomas@optonline.net]
Subject: Music for the OSHC Service of March 5, 2017, the First Sunday of Lent

Last Wednesday we entered the season of Lent.  “Lent” is a word derived from another word which meant “lengthening days” which was itself formed by combining  two Old High German words meaning  (langaz “long” + tina “day”).

Ash Wednesday this year was on March 1; in 2018 it will start two weeks earlier—on February 14.

Lent was originally a period of 40 days of fasting between Ash Wednesday and Easter.  The days of fasting matched the forty days and forty nights that Jesus spent in the wilderness, where he ate nothing and was tempted by the devil.

More accurately, Lent is a period during which there is traditionally 40 days of fasting. One doesn’t fast on Sunday.  Sunday is the day of the celebration of the resurrection.  There can be no fasting on Sundays.  Skipping the six Sundays leaves 40 days of fasting.

The “temptation of Christ” is another one of those stories that appears only in the synoptic gospels.  It’s not mentioned in John.

The introit is “Be Still and Know” by J. Jerome Williams.    He attended Mars Hill College in Mars Hill, NC, and Appalachian State University in Boone, NC.  J. Jerome Williams taught high school band and was the choir director of the First United Methodist Church in Hickory, North Carolina, for 31 years, retiring in 2007.

The opening hymn is “Jesus Walked this Lonesome Valley,” hymn no. 80.  It is called an “American Folk hymn” in some hymnals.  In others it is called a “traditional spiritual” or an “African American spiritual” or just an “American spiritual.”  It wasn’t usually thought of as a song to be included in a hymnal and appeared in only ten hymnals before 1975.  It has become more popular as a hymn since that date.

https://youtu.be/bZGhRP9UFH8 “You Got to Walk that Lonesome Valley” sung by the Morris Brown Quartet (with falsetto part)

https://youtu.be/BcbqCssiBUc “You Gotta Walk that Lonesome Valley” sung by Pete Seeger and Arlo Guthrie (I like this one)

Now some folks say, John was a Baptist,

And some folks say, he was a Jew,

But the Holy Bible  tells us,

Now though the road,  be rough and rocky,

And the hills be steep and high,

We can sing as we go marching,

And we’ll win that great big union by and by.

The anthem will be the same thing we sang on January 29, "What Does the Lord Require?" (music by Jim Strathlee ), but this time it will be sung as a round.

It is the story about what Eve does after the serpent tells her that God wasn’t telling her the truth when he told her that if she ate from the tree in the center of the garden, that she would then die.

Instead, the serpent says, she will be like divine beings who know good and evil. (And having not yet eaten from the tree, Eve couldn’t yet tell the difference between good and evil, or right from wrong, so she decided to trust her own eyes, and she saw that “the tree produced fruit that was good for food, was attractive to the eye, and was desirable for making one wise.”)

So she took some of the tree’s fruit and ate it.

And as Adam was there with her, she gave Adam some of the fruit also. 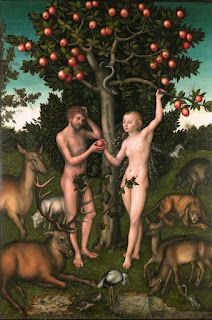 What I like best about this painting is that Adam is scratching his head. 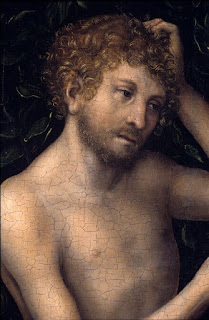 Adam scratching his head, “Adam and Eve” by Lucas Cranach the Elder

Adam is probably thinking, “What’s this?  A piece of fruit? Why is she getting so lovey-dovey all of a sudden?  Is this some trick?”  But having not yet eaten of the fruit, he too cannot tell good from evil, and, feeling a bit puckish and also finding the matter much too difficult to ponder over for very long, Adam takes a bite.

Lucas Cranach the Elder (or those in his workshop) painted several versions of Adam and Eve and The Fall.  This one appears to place more of the blame on Eve, as Adam doesn’t even take hold of the fruit.  Instead, Eve is shoving the fruit in his mouth. 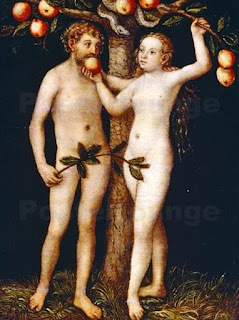 Another “Adam and Eve” attributed to Lucas Cranach the Elder

The gospel reading is Matthew 4: 1-11.  In this reading, the devil tries to tempt Jesus.  But Jesus was already wise and knew the difference between good and evil. He was able to resist.

Two Devils Tempt Christ on a capital in the Church of St. Martin, Plaimpied-Givaudins, France

Hymn no. 81 is the second hymn, “Lord, Who Throughout These Forty Days.”

http://youtu.be/eu4eVKgGehY “Lord, Who Throughout These Forty Days” (with each part played distinctly)

The words were authored by Claudia Francis (Ibotson) Hernaman in 1873.  The tune is ST. FLAVIAN.  The same tune is sometimes used with “Be Known to Us in Breaking Bread.”

The title of the sermon is: “The Power To Resist Temptation.”

Here it is sung in Thai (with English translation):

https://youtu.be/jsqHOt29_48 “Jesus, Thou Joy of Loving Hearts,” played by Andrew Remillard from the burgundy Presbyterian Hymnbook (1955). 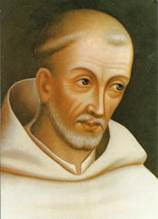 Bernard of Clairvaux was a French abbot.  Upon the death of Pope Honorius II on 13 Feb 1130, Bernard played an important role in determining who would become the next pope.

France, England, Germany, Castile, and Aragon supported Innocent, as did Bernard, while southern France, most of Italy, Sicily, and the patriarchs of Constantinople, Antioch, and Jerusalem supported Anacletus.  Bernard went to the nobles in the regions that supported Anacletus to persuade them to support Innocent instead.

Bernard then busied himself with fighting heresies.

Then in December 1144, Edessa fell from Christian control at the end of a siege led by Zengi the atabeg of Mosul and Aleppo, and Bernard took on the task of trying to gain support for a Second Crusade.  The defense of Edessa had been led by Archbishop Hugh II (Latin), Bishop John (Armenian), and Bishop Basil (Jacobite), but the three bishops and their forces had been no match for Zengi the atabeg. 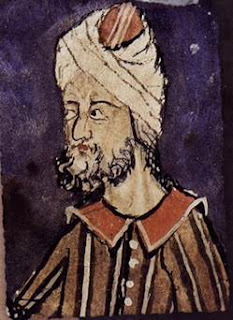 Bernard preached to Louis VII of France and to his wife, Eleanor of Aquitaine, and to many princes and lords in Germany and elsewhere.  He was rather successful in drumming up support for the Second Crusade, which was aided by the granting of indulgences and the distribution of pilgrims’ crosses.

His preaching did “inadvertently” lead to attacks on Jews, including a massacre of Jews in the Rhineland, Cologne, Mainz, Worms, and Speyer (the Jews were charged of having not given sufficient financial support to “rescue the Holy Land”), but it is claimed that Bernard himself was neither “a bigot nor a persecutor.”

The Second Crusade was a monumental failure.  There was much distrust among the leaders of the various Christian forces.  Even the marriage of Louis and Eleanor, who had personally gone to Jerusalem, fell apart.  They sailed back to France in separate ships.

Bernard of Clairvaux was humiliated and wrote a letter of apology to the Pope.  He blamed the failure of the Second Crusade on the sins of the crusaders “and tried to disassociate himself from the fiasco altogether.”

In 1854, he was a student at Exeter College, Oxford, but did not obtain a music degree from the college until 1867.  After that he received his training in civil engineering and went to India to build railroads.

The closing hymn is “Forty Day and Forty Nights,” no. 77.

http://youtu.be/zoHDgGvpXgs  “Aus der Tiefe Rufe Ich (Out of the Depths, I Cry)”

This same tune is instead sometimes called HEINLEIN.

The name AUS DER TIEFE RUFE ICH derives from the first use of the tune, which was with a text based on Psalm 130.

Here is a YouTube video that plays each part emphasized (changing the emphasized part with each verse):

He was not buried in the Frankfort great Cemetery, but in a newer one on the other side of the river Main. As he had died suddenly, and was entirely unknown in Frankfort, and had no relatives with him, and as there was no possibility of communicating with his relatives, he was entered simply as “Smyttan,” “England,” and buried among the poor in an unpurchased grave.

Here is piece for organ composed in 2006 that is based on the tune:

The prelude is the tune CONSOLATION by Felix Mendelssohn-Bartholdy.  The tune is used with words by Harriet Beecher Stowe.  Her hymn is called "Still, Still with Thee When Purple Morning Breaketh." The arrangement is by P. Slack.

Harriet Beecher Stowe also wrote Uncle Tom’s Cabin.  One of the South Haven Presbyterian Church’s pastors, the Rev. Ezra King, received his theological training from her father, Rev. Dr. Lyman Beecher.  (Rev. Lyman Beecher was the minister of the East Hampton Presbyterian Church from 1798 to 1810.) Her brother was the infamous Henry Ward Beecher of Plymouth Church of the Pilgrims, 75 Hicks St., Brooklyn.

The music for the offertory is "Dedication" by William Stickles.  I’m not sure  whether he is the composer of “Dedication” or whether he instead prepared an arrangement of a piece called “Dedication” which is by someone else.  (A Sunday bulletin of a church in Mississippi listed him as the arranger of “Dedication.” There are several hymn tunes with the name DEDICATION.)

William Charles Stickles was born in Cohoes, New York, on 07 Mar 1882.  He was a composer, arranger, teacher, and editor.

The postlude is "Introduction—Choral” from Suite Gothique by Léon Boëllmann.

Boëllmann was born 25 Sep 1862 in Ensisheim, Haut-Rhin.  He was educated in Paris, entering the School of Classical Religious Music when he was only nine years old.

After graduation, he “moved in the best circles of the French musical world.”

It was said he could “coax pleasing sounds out of recalcitrant instruments.”

Posted by OSHPC Reporter at 9:02 AM