The introit this week is “Come, Dearest Lord, Descend and Dwell.”  (It is the introit on the sheet with two other responses on it, “Father, Fill Us with Thy Love” and “Father of Mercies.”) The words are by Isaac Watts.  The tune is FEDERAL STREET by Henry Kemble Oliver (b. Beverly, Massachusetts, 1800; d. Salem, Massachusetts, 1885).

Henry K. Oliver is buried in the Broad Street Cemetery in Salem, Massachusetts, and his grave has an unusual stone.  I think the carving at the top is meant to depict organ pipes, but it’s hard to tell. 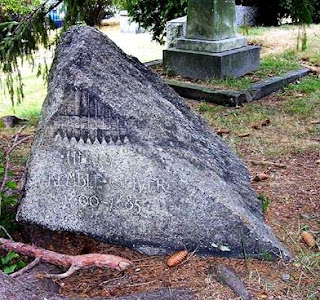 The opening hymn of praise is no. 229, “From All That Dwell Below the Skies” with words by Isaac Watts (1719).  We don’t sing it very often, but we do frequently sing “All Creatures of Our God and King,” which is sung to the same tune, LASST UNS ERFREUEN, a tune that was first used with an Easter hymn of that name, that begins, “Lasst uns erfreuen herzlick sehr” (1623, Cologne).  The tune is also used with “Ye Watchers and Ye Holy Ones.”

Isaac Watts was a precocious child.  He began to learn Latin at age 4 and was “writing respectable verses at the age of seven.”  He was not a member of the Church of England, but instead went to London (the academy at Stoke Newington, a district in the London Borough of Hackney) to study under an Independent minister at age 16. (His father, a school teacher, was a Nonconformist.) 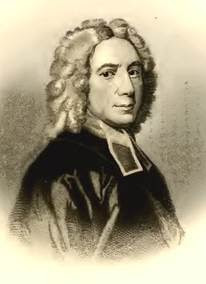 After graduating at age 20, he went home to Southampton for two years.  Most of his hymns were written during that period.  This was followed with a period of six years as the tutor of the son of Sir John Hartopp, “an eminent Puritan.”

He then served as a minister at the Independent Church in Mark Lane, London, for ten years.  (Oliver Cromwell’s granddaughter, Mrs. Bendish, was a member there.)

Then Sir Thomas Abney invited Isaac Watts to come live in his residence (Abney Park), and he not only accepted the invitation, he lived there for the rest of his life.  There he engaged in literary pursuits and also continued to preach from time to time.  He was said to have had “delicate health.”

Sir Thomas Abney had more than one residence, and Isaac Watts first “resided principally at the beautiful country seat of Theobalds, Herfordshire” for thirty-six years, then lived in London (Stoke Newington) for the final thirteen years of his life. Watts produced a great number of theological works, and many felt “his views on the Trinity were highly suspect.”  Some thought he might even be a Unitarian!

Despite his “delicate health,” he lived to the age of 74, dying on 25 Nov 1748.  He was buried at Bunhill Fields, a Puritan burying ground.

https://youtu.be/8Gzpg7aTJik  “From All that Dwell Below the Skies,” LASST UNS ERFREUEN, a cappella

Here are some tiny people in a cold cathedral singing the words that originally went with the tune:

The Old Testament reading is Ezra 4:1-16. Ezra 4 may be rather difficult to read aloud.  Ezra 4:7 has “. . . during the reign of Artaxerxes, Bishlam, Mithredath, Tabeel, and the rest of their colleagues wrote to King Artaxerxes of Persia.”  (The selection ends with the writing of the letter and does not include the King’s response.)  Those names, plus Rehum, Shimshai, Jeshua, Ashurbanipal, Xerxes, Zerubbabel, Uruk, Susa, and the Elamites may not trip lightly off the tongue.

When the enemies of Judah and Benjamin heard that the exiles were building the Temple of Yahweh, God of Israel,  they came to Zerubbabel and Jeshua and the heads of families and said, 'Let us help you build, for we resort to your God as you do and we have been sacrificing to him since the time of Esarhaddon king of Assyria, who brought us here.'

Zerubbabel, Jeshua, and the other heads of Israelite families replied, 'It is out of the question that you should join us in building a Temple for our God. We shall build for Yahweh, God of Israel, on our own, as King Cyrus king of Persia has commanded us.'

The people of the country then set about demoralizing the people of Judah and deterring them from building;  they also bribed counsellors against them to frustrate their purpose throughout the lifetime of Cyrus king of Persia right on into the reign of Darius king of Persia.

In the reign of Xerxes, at the beginning of his reign, they drew up an accusation against the inhabitants of Judah and Jerusalem.  In the days of Artaxerxes, Mithredath, Tabeel and their other associates wrote to Artaxerxes king of Persia against Jerusalem; the text of the letter was written in Aramaic writing and dialect.

Then Rehum the governor and Shimshai the secretary wrote a letter to King Artaxerxes, denouncing Jerusalem as follows:

'From Rehum the governor and Shimshai the secretary and their other associates, the judges, the legates, the Persian officials, the people of Uruk, Babylon and Susa -- that is, the Elamites-  and the other peoples whom the great and illustrious Ashurbanipal deported and settled in the towns of Samaria and in the rest of Transeuphrates.'

This is the text of the letter which they sent him:

'To King Artaxerxes, from your servants the people of Transeuphrates:  'May the king now please be informed that the Jews, who have come up from you to us, have arrived in Jerusalem and are rebuilding the rebellious and evil city; they have begun rebuilding the walls and are laying the foundations;  and now the king should be informed that once this city is rebuilt and the walls are restored, they will refuse to pay tribute, tax or toll, thus the king will incur a loss;  and now, because we eat the palace salt, it is not proper for us to see this affront offered to the king; we therefore send this information to the king  so that a search may be made in the archives of your ancestors: in which archives you will find and learn that this city is a rebellious city, the bane of kings and provinces, and that sedition has been stirred up there from ancient times; that is why this city was destroyed.  We inform the king that if this city is rebuilt and its walls are restored, you will soon have no territories left in Transeuphrates.'

The epistle reading is 2 Corinthians 7:2-16.  Paul, who is in Macedonia, has written a severe letter to the Corinthians which makes them sad.  Paul tells them it is the kind of sadness that God intends, a sadness that brings repentance, and repentance leads to salvation.

“Loving Spirit,” hymn no. 323, is the second hymn.  The text of the hymn is  relatively new, but not the tune.  The tune is OMNI DIE and was composed in 1631 by David Gregor Corner (also known as Gregor I. Cornerus).  He was a Benedictine abbot.   He studied theology at Wroclaw , Prague, Graz, and Vienna. He was appointed Rector of the University of Vienna in 1638.  He died at Göttweig on 09 Jan 1648.  The tune is sometimes used as a setting for “For the Bread which You Have Broken,” but not in the blue Presbyterian Hymnal.  I found a video of “Jesus Calls Us; O’er the Tumult” set to the tune, though that hymn is most often set to GALILEE.

The words are by Shirley Erena Murray who was born in 1931 in Ivercargill, New Zealand.  She was made a Fellow of the Royal School of Church Music in 2006.  [I didn’t even know there was a Royal School of Church Music.  The RSCM was founded in 1927, and it isn’t actually a “school.”]  Shirley Murray is married to a former Moderator of the Presbyterian Church of New Zealand and has spent “most her life” as a Presbyterian.

The sermon title is “Loving Spirit.”

The closing hymn is no. 539, “Savior, Again, to Thy Dear Name, We Raise with One Accord Our Parting Hymn of Praise.” 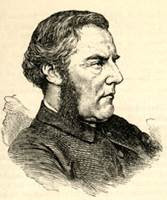 He wrote The Holiest Manhood and its Lessons for Busy Lives  in 1882 (“thirteen ten-minute sermons or sermonettes of excellent quality”) and Our Infirmities: Six Short Instructions in 1883.  (You can read the latter here: http://books.google.com/books?id=HhwFAAAAQAAJ&printsec=frontcover#v=onepage&q&f=false )

Ellerton was educated at Trinity College, Cambridge.  In addition to the hymn we will be singing on Sunday, Ellerton wrote hymns for every season of the church calendar, including “King Messiah, Long Expected,” a hymn for The Circumcision of Christ (1 January).  He also wrote the more popular hymn “Welcome, Happy Morning! Age to Age Shall Say.”

In 1860, John Ellerton became the chaplain for Lord Crewe and vicar of Crewe Green. Here is where Lord Crewe lived, Crewe Hall: 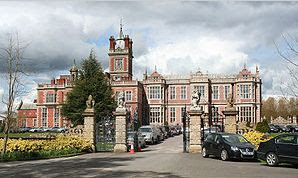 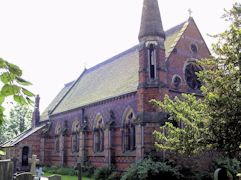 Hungerford Crewe, the 3rd Baron Crewe, was educated at Eton College and Christ Church, Oxford.  He inherited 10,148 acres in Cheshire. He was elected a fellow of the Society of Antiquaries in 1840.  He never married.  He died of influenza at Crewe Hall in 1894, and the barony became extinct upon his death.  His estates were inherited by the son of his sister, who later was made Earl and Marquess of Crewe. 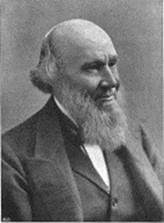 The tune, ELLERS, was composed by Edward John Hopkins (b. Westminster, 30 Jun 1818; d. London, 04 Feb 1901).  As a boy, he was a chorister at the Chapel Royal and sang at the coronation of King William IV in 1830.  He was a founder of the College of Organists.  The Archbishop of Canterbury presented him with an honorary Doctorate of Music in 1882.

He wrote thirty hymn tunes.  Here is ELLERS played by the Woodfalls Band as they warm up for the 2014 West of England Regional Championships.

http://youtu.be/ZW2XlhQOqtw ELLERS played by the Woodfalls Band, a brass band

The prelude is “Andante” by Handel.  There are many Handel “andante” pieces and movements.  It might be “Andante in E flat” from Sonata No. 6.

That piece has some twiddly bits.

The music for the offertory is called “Offertory,” appropriately enough.  It is by Robert Schumann.  It might be the “Offertorium” from Robert Schumann’s “Missa Sacra (Mass),” Op. 147.

Schumann did more than one “Mass,” so it could the “Offertorium” of another one.

Robert Schumann (1810-1856) intended to be a concert pianist, but he injured his hand, and turned to composing instead.  He attempted suicide in 1854 and, at his own request, “was confined to a mental institution,” where he spent the last two years of his life. 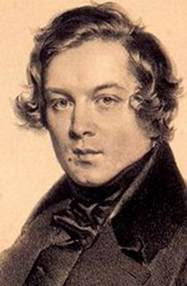 The postlude is “Moderato” by Charles-François Gounod.

There is also the theme to “Alfred Hitchcock,” “Funeral March of a Marionette”:

https://youtu.be/Hx0HT_fVbwI “Funeral March of a Marionette” played on a virtual organ (a virtual version of the sound of the pipe organ at the Palace of Arts in Budapest) The best known works of Charles Gounod are Ave Maria and his opera Faust.

Gounod also wrote Marche Pontifcale, the official anthem of the Pope, the Holy see and the Vatican City State.

Posted by OSHPC Reporter at 8:01 AM