Here is the music for this Sunday’s service:

The introit is “We Come Before Thee.” (MIDI attached.)  Our score says the piece is by “James Denton,” but that was just a pseudonym.  It is actually by Dr. Robert J. Hughes, whose gravestone in Greenville, South Carolina, says he was “promoted to glory” in 1999 (at age 83).  He wrote or arranged more than 4,000 pieces of music.  See my e-mail of 02 Jun 2014 for more about Dr. Hughes.


Although not sung, the call to worship is the text of “God of Our Life Through All the Circling Years” which was written by Hugh Thomson Kerr in 1916.

He was elected Moderation of the General Assembly in 1930, and he championed the production of the green 1933 Presbyterian hymnal that many of us remember fondly.  (Old South Haven used the 1933 hymnal until at least 1985, then we went to the Rejoice in the Lord hymnal, edited by the hymnologist Erik Routley, which was also a very good hymnal.)

Rev. Kerr served as pastor of the Shadyside Presbyterian Church in Pittsburgh for 33 years (1913-1946). He was also one of the founders of Worldwide Communion Sunday, which we celebrated last Sunday.

When sung, it is sung to the tune SANDON.

http://www.hymnary.org/media/fetch/149211 tune SANDON (1860) by Charles H. Purday, who served as “conductor of psalmody” at Crown Court Scots Church, Covent Garden, London.  Purday also sang at the coronation of Queen Victoria.
The opening hymn is no. 130, “Come Thou Almighty King” which has no known author.  It appears in at least 1,531 hymnals.  It appears in Rev. George Whitefield’s Collection of Hymns for Social Worship, More particularly designed for the Use of the Tabernacle and Chapel Congregations.

Rev. George Whitefield was a friend of the Wesley brothers, who founded the Methodist Episcopal Church.  However, he and the Wesleys later had a falling out over predestination and some of the other tenets of Calvinism.  Rev. Whitefield, although preaching the necessity of having a conversion experience, remained a strong Calvinist.

First arriving in America at age 24, Whitefield would make six more trips to the colonies.

Whitefield often preached in the open air, sometimes drawing crowds as large as 30,000.

Rev. George Whitefield was the cause of much turmoil in the established churches, including on Long Island, where he also travelled.

The Presbyterian minister of Southold, James Davenport, became so enthusiastic a follower of Rev. Whitefield that he led a crusade through Connecticut (and got arrested).  (Davenport was “young and fervent in spirit.”)  Jonathan Barber of Orient also fell under Whitefield’s spell, and Davenport and Barber became close companions.

Davenport is said to have moved his audience through dramatic skill, “as though they heard the groans of Him who died on Calvary,” and in preaching, he exhausted himself with contortions of his face and body.  “His strange, singing tone in speaking was imitated and perpetuated for half a century among ‘the Strict Congregationalist’ at the East and the ‘Separate Baptists’ at the South.

Overcome with zeal in New London in 1743, Rev. Davenport had to be restrained from condemning and burning his own red plush breeches in a “sacrificial blaze of worldly goods.”

[They made a pile of “petticoats, silk gowns, short cloaks, cambrick caps, red-heeled shoes, fans, necklaces, and Davenport’s breeches,” but a moderate friend persuaded them not to burn the pile.]

Rev. Davenport was the cause of  a rift in the Bridgehampton congregation which took 60 years to heal.  (The Bridgehampton minister at the time, the Rev. Ebenezer White, is an ancestor of Tom White, the organist at Bridgehampton who advised Old South Haven  a few years ago on the refurbishing of its Hinners organ.)

Davenport and his companion, Jonathan Barber, also went to East Hampton, where

“Many untoward and ever-to-be-lamented circumstances occurred.”

They caused so much discord in the East Hampton congregation that the elderly Rev. Huntting requested permission to retire.

Giardini composed this tune especially for the text of the hymn after being requested to do so by Selina Shirley Hastings, the Countess of Huntingdon. (“Shirley” was her maiden name.  Lady Selina Shirley was herself the daughter of an Earl, and she became a countess after marrying Theophilus Hastings, 9th Earl of Huntingdon.  The earldom had been created in 1529 for Baron George Hastings by King Henry VIII.) 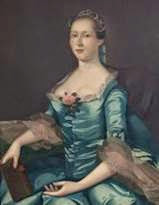 The Countess of Huntingdon  (for more about her, see: http://en.wikipedia.org/wiki/Selina_Hastings,_Countess_of_Huntingdon )

Here is an a cappella version by a women’s group:

http://youtu.be/X-0xBU98r7o “Come Thou Almighty King” sung by women, a cappella

And here is Samuel Metzger’s arrangement for the procession of the choir of Coral Ridge Presbyterian in Fort Lauderdale, so of course, it has a descant.

http://youtu.be/LYFic88QkYY “Come Thou Almighty King,” Coral Ridge Presbyterian, while the Rev. James Kirkpatrick was still living.
There will be special music sung by Matt Taylor.  The song that will be sung was written for John Denver.

John Denver had a conversation about the human spirit with the cowboy, poet, and author Joe Henry, who, after that conversation, wrote the words of the song. (Denver and Henry have also co-authored songs.)

The song is “The Wings that Fly Us Home.”

It was the last track on John Denver’s 11th album, Spirit, released in  August 1976.

You can read the lyrics here: http://youtu.be/j_zsKg8vzZE “The Wings that Fly Us Home” by Joe Henry (lyrics) 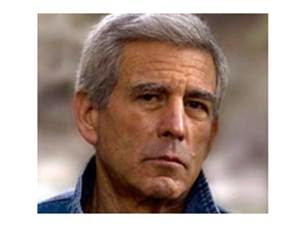 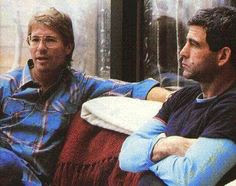 He wrote this hymn, “Wer nur den lieben Gott läßt walten,” when he was 20.  He also wrote the tune (or, at least, he wrote the melody).

Here is the hymn, sung in German:

The hymn is the framework for an important scene in a comedy/road movie about three monks, Vaya Con Dios (2002).

“Go with God” is an odd name for a comedy.  Here’s what I found out about the movie:

At first glance, this hardly seems to be a German film at all. First of all, it's funny! But with the title VAYA CON DIOS and a director named Spirandelli, one almost expects to see an impish Roberto Benigni pop up in yet another Italian comedy. But German-born Zoltan Spirandelli has turned his first full-length feature film into a delightful, above-average comedy about three German monks forced to abandon their timeless monastery and venture out into the modern world.

The performance of the hymn in this little-known movie is well-worth watching:

As we know from the English translation of this hymn that it is a hymn of consolation, one would think that might help us in figuring out what this scene is about, but I’m not sure that it does.
The closing hymn, “Immortal Invisible,” was authored by Walter Chalmers Smith in 1867.  Rev. Smith was born in Aberdeen on 05 Dec 1824. After 1876 was the pastor of the Free High Church, Edinburgh.  He died in 1908.

(The Free Church of Scotland resulted from the Disruption of 1843, when a group of ministers and congregations withdrew from the established Church of Scotland.  They got back together in 1929.  In 1934, the Free High Church of Edinburgh became the library of New College.) 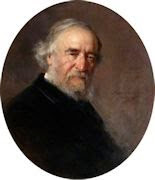 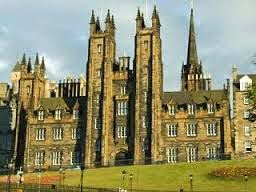 The tune, ST. DENIO, is based on a Welsh ballad, "Can mlynedd i nawr (A Hundred Years from Now).”  It first appeared as a hymn tune in 1839.

I was able to find a few references to the Welsh ballad, but I haven’t yet been able to find out what the ballad is about.

You can hear the hymn sung here as it was recorded by BBC One in Halifax in West Yorkshire at The Minister Church of St. John the Baptist:

http://youtu.be/spE-BE23qxA “Immortal, Invisible, God Only Wise” sung by a congregation in Halifax (England), on a Songs of Praise special (with a descant)

The church has a 900-year history which you can read about here: http://www.halifaxminster.org.uk/about-us/history/

Here is “Immortal, Invisible” sung a cappella by the Smucker family:

http://youtu.be/NacT-XxQcp0 “Immortal, Invisible, God Only Wise” sung a cappella (although I think the bass voice may be electronically enhanced)

Both of the above are with lyrics on the video, so you can sing along.
Instrumental Music
Prelude: “Der Tag, der ist so Freudenreich” by J. S. Bach.  We heard this piece on 30 Mar 2014, so I’ll just repeat what I said then:

http://youtu.be/T1ianrMfr6s  "Der Tag, Der ist so Freudenreich" Played on an organ that Bach himself very likely played , the 1741 Tobias-Heinrich-Gottfried-Trost Organ

The organ has a zimbelstern!  Unfortunately, you can barely hear it in this piece except at the beginning and end.

I like zimbelsterns, but you don’t see them very often.  The organ of the All Souls Unitarian Church at Lexington Ave. and 80th Street in NYC, a 1989 Holtkamp organ, has a Glockensonne, but I’ve never seen it played.  (All Souls was founded as a Congregational church in 1819.) 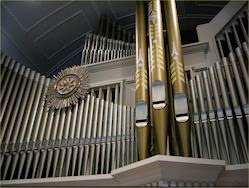 I guess a Glockensonne is like a Zimbelstern, but either with bigger bells, or maybe the set of bells that is tuned differently (a third instead of a quint).

You can also watch the piece played as an animated score:

Chorale Text, German:
Der Tag, der ist so freudenreich
aller Creature,
von eier Jungfrau ist gebor'n,
Maria du bist ausserkor'n,
dass du Mutter wärest.
Was geschah so wunderlich?
Gottes Sohn vom Himmelreich,
der ist Mensch geboren.
The music for the offertory didn’t appear in the bulletin, so it will be a surprise.
The postlude is the “Austrian Hymn” (1797) by Franz Joseph Haydn.  It is sometimes known as the” Emperor’s Hymn.”  It is used as the tune for the hymn “Glorious Things of Thee are Spoken.”

Here is a congregation singing the Kaiser Hymn at the funeral of Otto von Habsburg, the last Crown Prince of Austria-Hungary, who died July 4, 2011.  He became the Crown Prince of the Empire in 1916, but two years later, the empire was dissolved.

http://youtu.be/pMMhfR5i9wA   Singing the “Kaiser Hymn” at the funeral of Otto von Habsburg, last Crown Prince of the Empire, son of Charles, last Emperor of Austria and King of Hungary, the last monarch of the House of Habsburg-Lorraine.  The funeral was held at St. Stephen’s Cathedral, Vienna, Austria, on July 16, 2011.

Otto’s father, Charles, became emperor after Charles’s uncle, Archduke Franz Ferdinand, the presumed heir to the crown, was assassinated in Sarajevo in 1914, which started World War I.

God save, God protect
Our Emperor, Our Country!
Powerful through the support of the Faith,
He leads us with a wise hand!

Let the Crown of his Fathers
shield against any foe!
Austria's Destiny remains
intimately united with the Habsburg throne!

When Otto von Habsburg became the Crown Prince, the empire consisted of modern day Austria, Hungary, Bosnia, and Herzegovina.  He was buried in the Imperial Crypt.

I think I like the words of “Glorious Things of Thee are Spoken” better:

Another hymn often sung to this tune is “Praise the Lord! Ye Heavens, Adore Him.”

The tune is also used for the national anthem of Germany with words written in 1841 by Heinrich Hoffman, (“Das Lied der Deutschen”).

When the verse was written, it was in an effort to unite the people, of what had been many independent states, into the new unified Germany.  The song wasn’t adopted as a national anthem until 1922, and thereafter the first verse became associated with the Third Reich.  The tune is still the national anthem of Germany, but they’ve deleted the first two verses, do no more “Deutschland, Deutschland über alles, Über alles in der Welt.”

My favorite national anthem is the national anthem of Costa Rica, which is very much less militaristic.  It’s words are about how peace reigns under the clear blue skies of their homeland, and how simple farm hands, virile and valiant, labor in the fields until their faces are reddened (“enrojece del hombre la faz”) as they toil to make their land fruitful.

It ends, “Hail, gentle country! Hail, loving mother! Hail, O Homeland! Your fertile soil gives us sweet sustenance and shelter.  Under the limpid blue of your sky, may peaceful labor ever continue.”

No bombs bursting in air there.  Costa Rica abolished its military in 1944.

Richard
Posted by OSHPC Reporter at 6:13 AM