Thank you to Ken Asselta, Kappy Tilney, Judi Bird, and Deborah Mayo for work on lowering and raising the chandelier, cleaning it, and replacing the bulbs.

The chandelier has three tiers, with 5 bulbs in the top tier, 10 in the middle tier, and 20 in the bottom tier.

Twelve of the 35 bulbs were no longer turning on.

Here are “Before” and “After” photos: 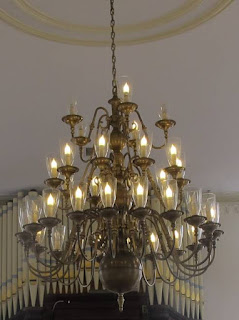 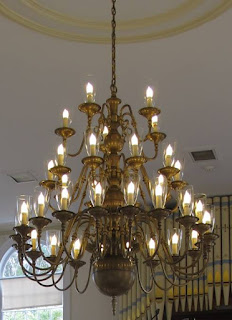 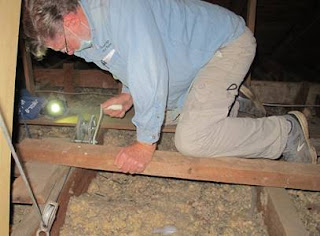 Ken, Lowering the Chandelier, being careful that the

crank doesn’t slip out of his hand,

(and that he doesn’t fall through the ceiling). 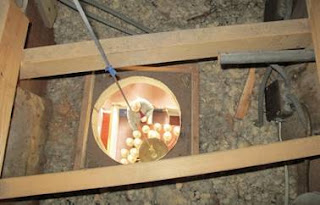 and making sure the support is

properly positioned for the chandelier to make

Kappy watched the other side.

(I don’t know why the circular opening in the ceiling is huge—only the small center part of the chandelier has to go through the ceiling—but it does give people in the attic a better view. I think there was a recessed light fixture in the center that was replaced by the opening for the chandelier in 1961.) 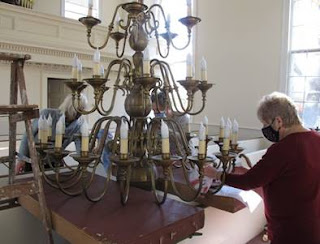 Deborah, Kappy, and Judi Dusting Off the Chandelier

After getting the chandelier down, the bulbs were removed and tested, and replaced if no longer working, and the “glass shades” were all cleaned.

Finally, All Thirty-Five Bulbs Are Working—now to get the glass shades back on.

Then began the long procedure of getting each of the 35 glass shades, 35 cylindrical socket covers, and 35 bulbs all back in place in a way that didn’t make a bulb stop working.

(It’s harder than it looks. If the thick-cardboard socket cover can’t be pushed down to the bottom of the glass shade, the bulb can’t be firmly seated in its socket---and the diameters of some of the socket covers made them a very tight fit inside the base of the glass shades. It took a lot of pushing and wiggling, which, unfortunately, resulted in fingerprints all over the newly cleaned glass shades.)

I slid in the bar through the eye on the chandelier and plugged it back in. Then, except for getting ourselves back down out of the attic, we were nearly done. 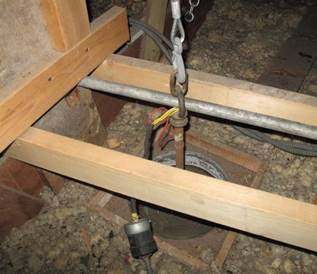 Bar through Eye of Chandelier to Hold It Up

(even if the steel cable is released or breaks)

Posted by OSHPC Reporter at 6:01 PM