The introit will be the Easter introit, “He is Exalted,” but without the trumpet accompaniment. 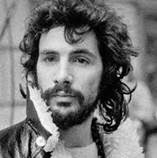 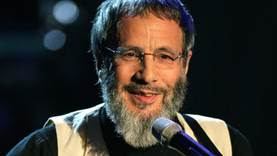 The words are by Eleanor “Nellie” Farjeon (1881-1965) who also wrote children’s stories.  She was born in London and “lived much of her life among the literary and theatrical circles of London.”

The tune BUNESSAN is named for a village on a peninsula of the island of Mull off the west coast of Scotland.

The tune was first used for the carol, “Child in a Manger,” written in Gaelic by Mary MacDonald (1789-1872).  When the words were translated into English by Lachlan Macbean (1853-1931), he gave the name BUNESSAN to the tune.  BUNESSAN was first published in 1888 in Songs and Hymns of the Gael.

or with better audio, here:

In 1979, [Cat Stevens/Yusuf Islam] . . . left his music career to devote himself to educational and philanthropic causes in the Muslim community. He has received several awards for his work in promoting peace in the world. . . .

The reading from Acts, which substitutes for a reading from the Old Testament during Eastertide, is Acts 2:14,36-41.  It includes Acts 2:40: “Save yourselves from this perverse generation.”  (Some translations have “corrupt” or “crooked” instead of “perverse.”)  The reading is about how the crowd responds to Peter’s exhortation, “Repent, and each one of you be baptized in the name of Jesus Christ for the forgiveness of your sins, and you will receive the gift of the Holy Spirit.”  Peter tells them that the promise of the Holy Spirit is for “as many as the Lord our God will call to himself.”  So Peter must not have been a universalist.

Although Jesus had sometimes drawn large crowds, few were baptized.  Peter, with the aid of the Holy Spirit, is much more successful, and three thousand people are baptized in a single day. 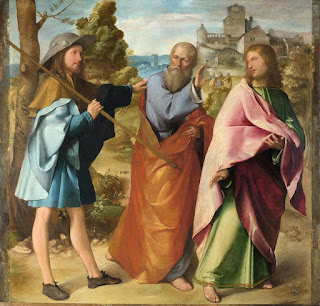 Altobello Melone’s painting The Road to Emmaus (~1516-17) of two disciples being startled by the appearance of a stranger.

With his silly hat as a disguise, and a dangerously-pointed walking stick (which he flings about carelessly as a distraction), and a weird costume (that causes the disciples to avert their gaze and only look upon him askance), Jesus is able to join the disciples without being recognized. 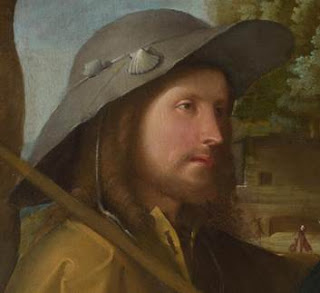 Here are other paintings of the two disciples being joined by another traveler, but not realizing that traveler is Jesus. 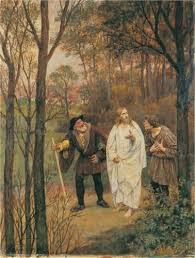 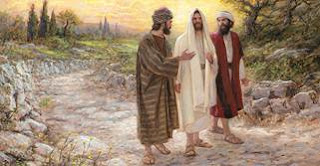 In the paintings above, it is a bit surprising the two disciples can’t recognize Jesus.  One would have thought his white robe would have been a dead give-away. J

Especially with the halo: 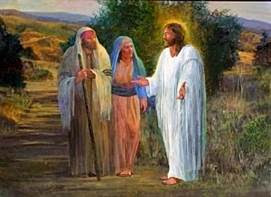 Perhaps the artists of the paintings above didn’t get the clothing right. An unknown Dutch painter in New York in the eighteenth century, showed Jesus wearing a red robe, but it’s still clear that he’s no normal traveler on the road to Emmaus: While at supper in Emmaus, Jesus breaks the bread, and the two disciples finally realize that the stranger who  joined them is actually Jesus. 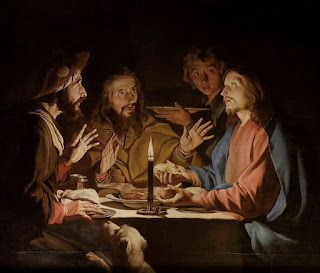 The artist was "especially noted for his depiction of artificially lit scenes."

as he did it that gave him away?

Even the servant-boy is struck by Jesus’ odd pose---the dog, however, is more interested in

getting something to eat.

The story appears only in Luke.  A very short account (with no details) does appear in “the longer ending of the gospel of Mark,” but that ending doesn’t appear in two of the most respected early manuscripts, and several early Greek manuscripts which do include it have marginal comments noting that earlier manuscripts lacked the verses.  In English translation, the story is only two sentences long:

Mark 16:12-13.  Afterward Jesus appeared in a different form to two of them while they were walking in the country. These returned and reported it to the rest; but they did not believe them either.

The second hymn is no. 363, “I Want Jesus to Walk with Me.”  It isn’t a hymn we sing often at Old South Haven, but it fits today’s gospel reading.  (The Smithtown Presbyterians sang this hymn on January 22, the Sunday after Martin Luther King Day—also the Sunday after the Presidential inauguration.)

It is an African-American spiritual.  The tune is called SOJOURNER.  The composer’s name is unknown.

The publisher of an anthem arrangement of this hymn says “imagine singing this hymn as a member of a chain-gang crew with heavy weights on your ankles, then “you can begin to understand . . . the intensity of the prayer.”

http://www.sheetmusicplus.com/title/i-want-jesus-to-walk-with-me-sheet-music/17321094 “I Want Jesus to Walk with Me”

(Click on the “Listen” beside the speaker icon, then click the “play” icon in the window that opens.)

Here is an interesting—perhaps even moving, depending on your mood—organ improvisation on the tune.  It is performed on an organ on rollers on a basketball court in Oregon:

https://youtu.be/7qR9Bj2L0U0 Organ improvisation on “I Want Jesus to Walk with Me,” played by Noah Freeman (in his white socks) on the Trillium organ, Trinity Lutheran Church, Bend, Oregon.

Here is a performance by a church choir in a warm church  (some of the choir members are fanning themselves):

https://youtu.be/xsLrtmIAaxU  “I Want Jesus to Walk with Me,” jazzy performance by a church choir, with piano, guitar, trumpet and drum set

https://youtu.be/koLAwjlJZYY “I Want Jesus to Walk with Me,” with Mormon Tabernacle Choir, sung by Alex Boyé

Alex Boyé is a British-American singer born in London on 16 Aug 1970 to Nigerian parents.  He never knew his father, who remained in Nigeria.  His mother told him one day she was going to Nigeria for a couple of weeks and did not return for eight years.  He was raised mostly in foster homes.  He started working at a London McDonald’s at age 16, where the manager was a member of The Church of Jesus Christ of Latter-Day Saints, which Alex then joined.  (For a time, he was a backing dancer for George Michael.)  He moved to Salt Lake City in 2000.  He joined the Mormon Tabernacle Choir in 2006 and became one of its three black choir members.

The title of the sermon is “Opening Eyes.”

Hymn no. 311, “We Meet You, O Christ, In Many a Guise (Your image we see, in simple—and wise)” is the closing hymn.  The words were authored by Fred Kaan in 1966.  The tune is a Basque carol called NORMANDY.  This hymn is more often set to STANLEY BEACH, DURHAM 72, or SHERSTON.

https://youtu.be/czas-C2kw8E Normandy Carol (not quite the same as in the hymnal), played by the World of Brass Ensemble

One version of the Normandy Carol tune is used as a setting for “Away in a Manger.”

Fred Kaan was born in Haarlem, The Netherlands, on 27 Jul 1929.  During World War II, his parents worked with the resistance and hid a young Jewish woman who had escaped from Belsen.  Three of his grandparents died from starvation during the war. He never attended church as a child, and first stepped into a church when he was in his late teens.

After studying theology and psychology at Utrecht University, he went to Great Britain (Western College in Bristol).  He became a Congregational minister in 1955 and served first in south Wales, and was the pastor at Pilgrim Church in Plymouth. In 1972, the “Presbyterian Church of England” and the “Congregational Church in England and Wales” merged to become the United Reformed Church.

Fred Kaan began writing hymns at age 34, originally as a way of summarizing and emphasizing the themes of his sermons.
He didn’t like the new style of hymns called “praise hymns,” which he called “nursery rhymes of the church.”  He believed that new hymns needed to “address the modern challenges to faith” and “issues of peace and justice.”

His hymns include “Let Us Talents and Tongues Employ,” “For the Healing of the Nations,” and “Now Let Us from this Table Rise.”

He was instrumental in the creation of the World Alliance of Reformed Churches in 1968.
In 1954, he had married Elizabeth Steller, a daughter of missionaries, but in 1989, they divorced.  After she died in 1993, he married a general practitioner, Anthea Cooke.  They moved to the Lake District after her retirement.

He developed Alzheimer’s disease and cancer and died on 4 October 2009 in Penrith.

The prelude is "Dedication" by William Stickles.  I’m not sure  whether he is the composer of “Dedication” or whether he instead prepared an arrangement of a piece called “Dedication” which is by someone else.  (A Sunday bulletin of a church in Mississippi listed him as the arranger of “Dedication.” There are several hymn tunes with the name DEDICATION.)

The music for the offertory is "Lento (Slow)" by Wolfgang Amadeus Mozart.  “Lento” is a tempo marking.  It can suggest any tempo between 52 and 108 bpm (according to some sources, other sources give 40-60 bpm).  “Lento” is generally thought to mean faster than “adagio,” but slower than “andante.”  However, as the range of tempos that “lento” can designate is so wide, it can be as slow as “largo” or as fast as “allegretto.”

In 1777, Mozart wrote that “tempo” was “the most difficult and most important, and the main thing in music.”

Jean-Pierre Marty, in Perspectives on Mozart Performance (Cambridge University Press, 2006)says that “tempo” in Mozart’s time had a broader meaning than it has today.

. . . it is certain that they [Haydn and Mozart] shared a common idea of tempo, an idea that transcended the mere question of speed.  The invention of the metronome at the beginning of the nineteenth century represented a distinct setback for both the comprehension and the expression of tempo, which was now reduced to its purely quantitative element.  This reduction had two major consequences: eighteenth-century tempo indications ceased to be understood; and metre lost its central role in the expression of tempo, so that composers were deprived of an essential element for conveying the expression of their musical message.

I’m not sure which one of Mozart’s compositions (that has a tempo marking of “Lento”) will be the music performed.  Mozart’s “Marche Funèbre del Signor Maestro Contrapunto” (1784) is one such piece.  Mozart intended the piece as a joke (as you can tell by the name of the piece, “Signor Maestro Contrapunto” indeed).  It is a parody of the first movement of his Concerto in D Major (K. 451). The similar theme is played Lento instead of Allegro as it is in the concerto.

Here it is played on an organ:

For comparison, here is the much faster theme played in Mozart’s Concerto for Piano and Orchestra, K 451:

Here it is played by a small orchestra in Brazil:

Posted by OSHPC Reporter at 8:17 PM