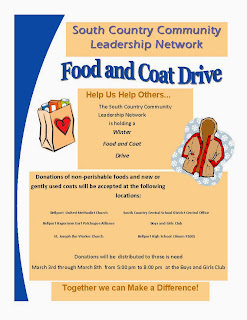 Attached is a flyer for those wanting to drop off donations at Bellport United Methodist Church BUMC) – Tues, Wed, and Thurs. (Feb. 18-20) and next week and, even

the next week.  BUMC will have collection boxes on the porch of Wesley House, 185 South Country Road, Bellport, between the hours of 10 am and 2 pm on those

Sermon: “The Need To Hear Words of Encouragement”

Served in the Gallery

This is the last chance to indulge yourself. Christians are (were) to use up the foods that aren’t (weren’t) allowed during Lent. In Brazil it is called Terca-feira gorda (Fat Tuesday) and is the final day of Brazilian Carnival. In France and New Orleans it is called Mardi Gras ( which means grease or Fat Tuesday. In Germany it is known as Fastnacht. In Iceland known as Sprengidagur (Bursting Day). And in Greece it is called Apocreas which means “from the meat” since they don’t eat meat during Lent, either. Pancakes are eaten on this day because they contain fat, butter and eggs which were forbidden during Lent.

Posted by OSHPC Reporter at 1:33 PM